This legend of freedom follows William Wallace as he seeks revenge for the sake of his love, family, dignity, and people. He fights the English army and their rules to win freedom for his people.

This legend of freedom follows William Wallace as he seeks revenge for the sake of his love, family, dignity, and people. He fights the English army and their rules to win freedom for his people.

Wow, where to start with this movie? This movie won five Oscars

– and was nominated for another five – Best Costume Design, Best Film Editing, Best Music, Original Dramatic Score, Best Sound and Best Writing, and Best Screenplay Written Directly for the Screen. I still don’t know why James Horner didn’t win the Oscar for the music because it has one of the best soundtracks ever.

Mel Gibson is a brilliant director, despite the fact that he is usually an actor. The movies that he has directed create the feeling that the director is acting inside the movie. Examples of this are his films The Passion of the Christ and Apocalypto. I didn’t mention Brave Heart because he both directs and acts in this movie. Mel Gibson won two Oscars for Brave Heart, Best Director and Best Picture.

As far as his acting performance, Mel Gibson portrayed the character better than the character himself could have, so I still don’t know why he didn’t even get nominated for Best Actor! His body language, especially his eyes, was just amazing. The very last scene in the film is especially powerful, when he is being executed and says the word, “FREEDOM!”

The cinematography was excellent, especially during the war scenes and other amazing moments, such as when the handkerchief falls from William Wallace’s hand in the last scene. The makeup and script were amazing.

I don’t know how many times I have seen this movie, but it’s more than twenty. I am not sure because whenever it is on, I just can’t resist it. I love this movie and the deep message it has about fighting for what you believe in, love, revenge, and sacrifice. 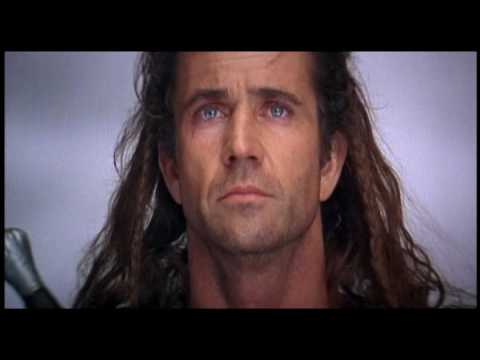